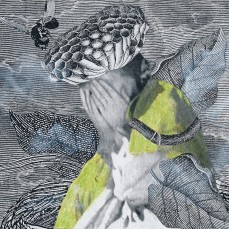 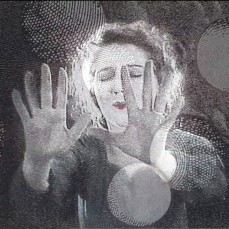 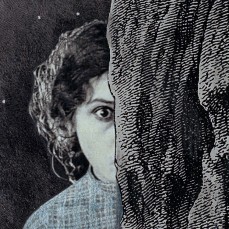 In Edge of Alchemy the silent-era actors Mary Pickford and Janet Gaynor are seamlessly appropriated from their early films of the 1920’s and cast into a surreal epic with an upending of the Frankenstein story and an undercurrent of hive collapse.
Comprised of over 6000 handmade collages, Edge of Alchemy is the third in a trilogy looking at the psychological terrain of women’s inner worlds. Music and sound design by Lech Jankowski (Brothers Quay).

Stacey Steers is a recipient of major grants from the Guggenheim Foundation, Creative Capital and the American Film Institute. She lives and works in Boulder, CO. 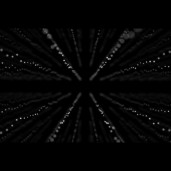 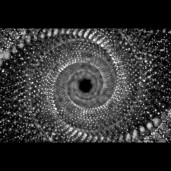 “Simple Rotation” is an open living system that evolves from a geometric system to an organic one, with chaotic and orderly spaces, that are interacting with each other. Simple Rotation is a rigid yet fluid body that connects the geometric lands to something organic and gives birth to a unique and unified living system.

I believe that the essence of life is process and progress. In “Simple Rotation”, I explored the idea of a living system that maintains itself while it develops and changes. And like a living system, I wanted it to breathe. To breath to John’s music.

The whole process started with the music, which was resonating with abstract atmospheric landscapes. I could almost immediately visualize flying through this endless space.

All the seemingly conflicting identities of geometry and organic, order and chaos, rigid and fluid, came together in whole, as two sides of the same. I see the process of creation or even better, LIFE, in this piece, from the beginning to end.

Musically, harmonies and textures unfold against a backdrop of a one-note synth/piano ostinato. John Kameel Farah is a Canadian composer-pianist. Farah now focuses primarily on his own creative hybrid of improvisation, composition and electronic music. Simultaneously using piano, synthesizer, computer, and at times harpsichord, his solo performances exist somewhere between the concert hall and an experimental DJ set, mixing forays into free improvisation, jazz, electroacoustics, middle-eastern modes, and ambient minimalism and distilling them into cohesive, imaginative surrealistic structures.

is an Iranian/Canadian multidisciplinary artist currently living in Berlin. She does motion design, live visuals, photography and calligraphy, while sometimes trying to bringing these worlds together. With her imagery, she aims to push the boundaries of perception and consciousness to expand our art of seeing.

Analyzing human interaction with objects and their functional and aesthetic presence in recurrent, yet questionable domestic scenarios.

Luca Cioci is a filmmaker and visual artist from Italy. He recently graduated with a BFA in Animation from CalArts and currently resides in Los Angeles working as a multi-disciplinary freelancer.